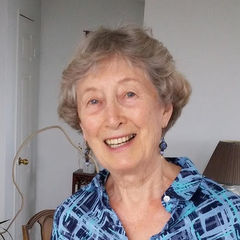 When I retired after 30 years of teaching I began to practice and teach Calligraphy. I served for a time as President of CAGT, Calligraphic Arts Guild of Toronto.

Wishing to add more colour to my lettering, I took Watercolour classes with David McEown and was inspired to work towards a degree in Fine Arts at York University. David became Artist-in-Residence with Quark Expeditions. A few students accompanied him on an expedition to the High Arctic and later to Antarctica, inspiring many snow paintings.

In 4th year at York, 6 weeks summer Studio Class, students were asked to choose any work of art prior to 1700 and produce a copy of the painting, size as, materials as the original work. The professor said, I’m looking for “fabulous fakes.” I chose to copy Judith Leyster’s oil painting “Young Flute Player” 1635. As I researched my essay on the life and times and materials of the artist, I learned that she was the only woman invited to become a member of the Haarlem Guild of some of the best known 17th century Dutch painters, including Frans Hals and Rembrandt. I was awed to learn that Judith Leyster and I both share the same July 28th birth date!

Some of my most interesting paintings have been intuitive, ‘happy accidents’. I poured paint, moved it around with a piece of cardboard, as I did with “Peace Among the Nations”. When I saw the head resembling a native Indigenous person, I was reminded of my Godmother who often read to me from her favourite poet, Longfellow’s “Hiawatha”. I was honoured to have this work chosen by our Mayor David Barrow.

“Discovering Ancient Egypt” similarly happened when I poured paint, covered it with flexible paper, pushed it around and left it to dry overnight. Next morning, the first thing i saw was an eye… the eye of Isis. As more creatures appeared, I was soon aware that they all belonged in Ancient Egypt.